This was the 37th consecutive Kodiak Christmas Bird Count. A record eighty-five people participated this year. We tallied 78 species and 14,384 individual birds on count day, and an additional 3 species in count week (the period from three days before, to three days after count day). Count Week birds were Sharp-shinned Hawk, American Three-toed Woodpecker, and Northern Shrike. The average number of Count Day species seen over the previous ten years is 77, so this year’s total was respectable, but not stellar. The post-count compiling party was held Claudia and Stosh Anderson’s house. Thank you, Claudia.

Twelve upland field parties included two Ptarmigan SWAT teams and, for the first time ever, a Great Blue Heron SWAT team. All three SWAT teams found their target birds. When I recently looked up the exact meaning of the acronym SWAT, I chuckled when I read that it means Special Weapons And Tactics, which fits our ptarmigan teams, in particular, to a T. As usual, we had two boats participating. This year they were the Ursa Major II and the Mythos. Bird feeder Counts were made from Monashka to Bells Flats at 22 feeders. Twenty one species were found at feeders. The most abundant species at feeders was Pine Siskin (482). Four species, Orange-crowned Warbler, American Tree Sparrow, Lincoln’s Willow Sparrow, and Golden-crowned Sparrow wereseen only at feeders. 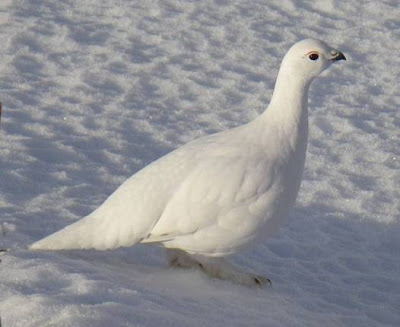 Rare species seen this year that have been seen fewer than sixteen times on Count Day in the history of the count (and the number of times seen) are: Ring-necked Duck (13), Willow Ptarmigan (5), Merlin (14), Orange-crowned Warbler (3), and Rusty Blackbird (4). 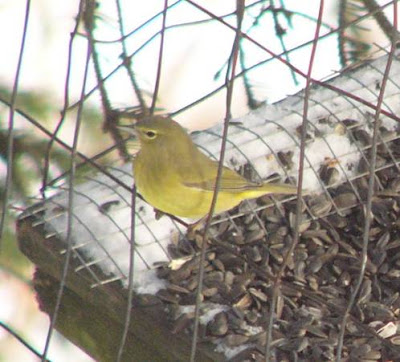 For the second time in many years, Kodiak did not have the highest count day species total in the state. This is the second year that the high count title goes to Ketchikan, which this year mustered an impressive 81 count day species. Ketchikan compiler Andy Piston once again pulled out all the stops and led his people to the pinnacle of Alaskan winter birding.

We are very fortunate to have large vessels covering the marine waters in the count circle. This year’s vessels were the Kodiak National Wildlife Refuge’s Ursa Major II, skippered by Jeff Lewis, and Dave Kubiak’s F/V Mythos. We appreciate the major effort they make to support the count.

You can find all count results, as they are posted, at: http://www.audubon.org/bird/cbc/

cw = seen count week only
Posted by C Anderson at 7:54 PM No comments:

Kodiak Audubon’s December Program is being presented by Rich MacIntosh. He will present a slide show with identification tips on the Winter Birds of Kodiak on Friday, December 11, 2009 in room 128-130 at the Kodiak College in the Benny Benson Building.

Join us at 6:30 p.m. for pizza and to sign-up for this year’s Christmas Bird Count. Rich’s talk will begin at 7:00 p.m. This is a wonderful opportunity to sharpen your skills for the 2010 count. This year’s count will held in town on December 19 and at Narrow Cape on January 2. For more information about the December program on the 11th you can contact Cindy at 486-1224. For more information about the Christmas Bird Count, please contact Rich MacIntosh at 486-3087.
Posted by C Anderson at 10:10 PM No comments: 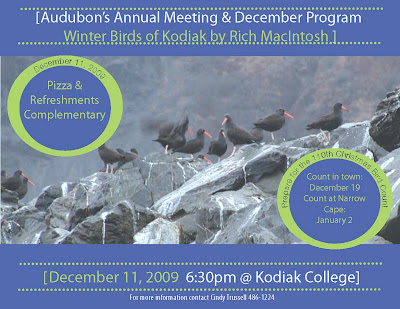 Posted by C Anderson at 5:28 AM No comments: